Grayscale, the asset management of the world’s largest bitcoin fund, met secretly with the Securities and Exchange Commission to try to persuade the agency to accept the conversion of its flagship fund into an ETF.

Converting the Grayscale Bitcoin Trust into a NYSE-traded ETF would increase bitcoin’s accessibility and security while also unleashing up to $8 billion in value for investors.

Grayscale tried again in April to get the US Securities and Exchange Commission’s clearance to turn the world’s largest crypto investment vehicle into a fund that trades on major Wall Street exchanges.

According to a letter issued to the Securities and Exchange Commission, the asset manager has focused on a legal detail in order to enhance its application with the regulator to convert its $40 billion Bitcoin Trust into an exchange traded fund.

From January to May 25, Whaley contrasted the returns of the Chicago Mercantile Exchange’s Bitcoin futures index, which BITO follows, to those of the CoinDesk Bitcoin Price Index, which GBTC would track, and discovered that the two are “close to perfect alternatives.”

Some netizens say that Gbtc provides a discount that many individuals will never have to use in a crypto derivative. Controlling equity oversight is necessary. It is not permissible to have floating fake overleveraged naked shares.

Futures-based ETFs must account for the expense of repeatedly rolling forward contracts as they expire, bolstering the case for a spot Bitcoin ETF, according to Whaley. 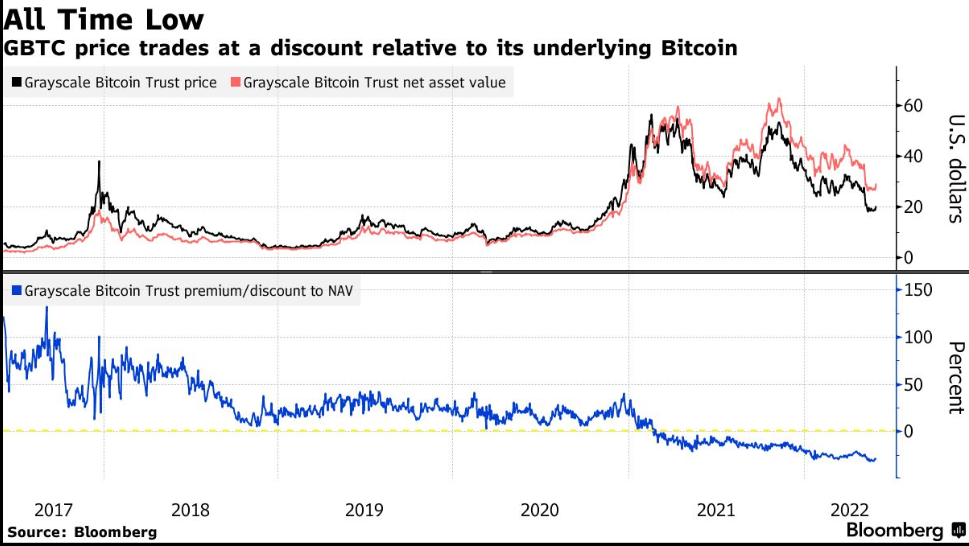 According to Martha Reyes, head of research at BEQUANT, a digital asset prime brokerage and exchange,

A futures-based ETF is not optimal since there is a cost to rolling into futures contracts, given contango… translating into underperformance versus the underlying asset, she explained. A situation in which the futures price of a commodity is greater than the spot price is known as contango.

Due to the delays, the SEC has until early July to reach a decision on the application, which was filed in October. Grayscale met with the SEC last month to discuss the matter. Because GBTC is a trust rather than an ETF, shares cannot be redeemed when demand declines, causing GBTC to trade at a discount to the Bitcoin it owns. Grayscale forecasts that turning the trust into an ETF might unlock up to $8 billion in value if the discount is fixed.

Bitcoin ETFs and the SEC:

The SEC’s decision to reject the application isn’t entirely surprising, given that just a handful organizations have requested for the approval, all of which have been denied.

The SEC rejected the Ark 21Shares joint application in April, which was a concerted effort between Wall Street giant Cathie Wood’s Ark Investment Management and trading firm 21Shares, documented for the benefit of Cboe BZX Exchange. The SEC stated that BZX did not meet the requirements for financial backer insurance because it lacked the weight required by the Exchange Act.

Over 97% tokens listed on Uniswap are scams, a study reveals