The concept of attempting to negotiate one’s way from a $500 offer to selling it for half a million dollars via DBS is extremely appealing. To understand what actually occurred, let’s start with the basics: what is DBS? Domain Broker Service, or DBS for short, is a service provided by GoDaddy to assist users in attempting to acquire an already registered domain.

In 2017, @cryptofelon purchased the domain. This user actually owns a few similar ones, for which he has received numerous offers.

“Know how much you’re worth.” That’s pretty good advice from a domain name registrant who turned a $500 offer into a $435,000 domain name sale using GoDaddy’s Domain Broker Service. An amazing Twitter thread explaining how the seller was able to accomplish this was shared by @cryptofelon, including correspondence from GoDaddy.

Despite the fact that the user had a lot of offers to choose from, he couldn’t ignore this one pestering person.

On his third outreach, this “persistent” person received a response from @cryptofelon, who stated that he would not accept anything less than 10 bitcoin for the domain.

That seemed to be the final stage of it for the user. Would this be the person who managed to meet him at the end of the race? They respond approximately a week later.

The response came across as a serious inquirer, wondering if 450,000 should be used as the domain name’s asking price.

@cryptofelon responded with the utmost diligence, as any learned person would. “Sure,” he said, and that was the beginning of a promising upward trajectory from the $500 offer. 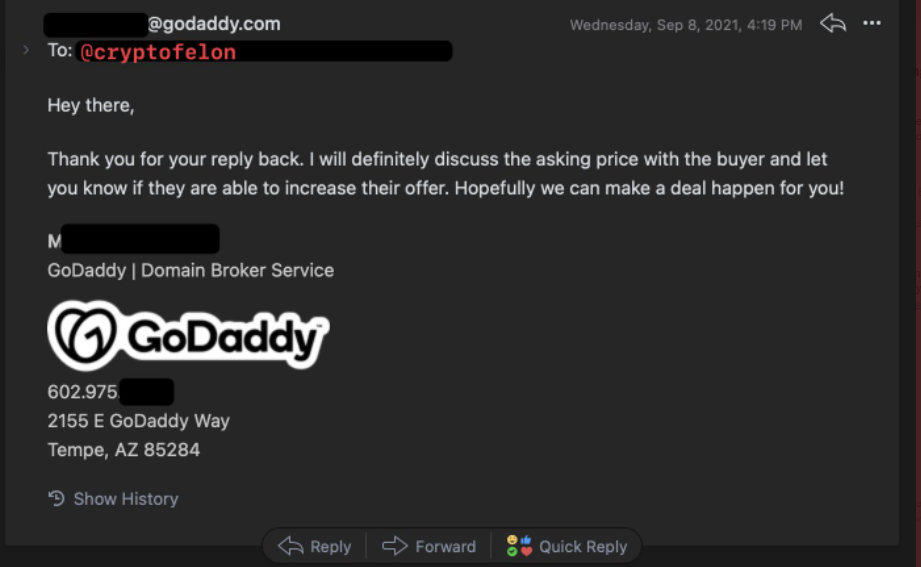 How much could they really come up with, the user wonders? to begin at $500 — was it a well-considered offer, and did they actually value the domain at that price?

or was it a test offer to see if he would accept or give in?

The user reveals that he was initially willing to accept, but then something strange happened the next day. Their next offer was $200,000, which they accepted. This is a 400% increase over their initial offer.

According to the email, there were numerous back-and-forth offers for the domain, with the final price being $200,000 USD, including all broker/listing fees.

With GoDaddy’s instant payment option, this was a pretty good deal to consider.

Despite the fact that the offer was incredible, @cryptofelon had his priorities set. He desired 10 BTC and was confident that he would be able to reach his goal.

So he used the same naive method as before and rejected down $200k for a name that cost him only $16.

It’s true what they say: “Know your worth and never accept  or settle for anything less.”

They returned a few days later, you can call  it a miracle or @cryptofellon’s great faith in himself.

The domain broker was clearly annoyed by his obstinacy, and warned him that he would most likely lose everything.

They even tried to persuade Jim to abandon the risky operation he was planning.

@cryptofelon couldn’t care less; all he wanted was 10BTC, and he wasn’t willing to accept anything regardless

The broker even offered him alternatives in an attempt to persuade him to drop his stern demand, but nothing worked. Alternatives included:

OPTION 1: They can accept the buyer’s higher offer of $200,000 USD and we can proceed right away. The buyer will also cover all Godaddy fees, so you’ll get the entire net cash in one go.

OPTION 3: They can indicate that the original $450.000 USD asking price is firm (not negotiable) and that they would work to persuade the customer to pay the entire amount.

After that, there was nothing but radio silence.

There were no back-and-forth negotiations or responses.

@cryptofelon waited, knowing what he was worth.

He had already waited four years to sell this domain, so there was no reason to wait any longer.

After a week, he finally reached out to me.

He asked for ten bitcoins, which was a better deal than the $500k he had asked for.

These patterns would upset anyone, and the brokers were no exception. They were sick of him insisting on pricing everything in bitcoin.

They indicated they’d try to push the buyer up to $350k if @cryptofelon was willing to sign today for that amount.

The broker admits that he understands how he wants to trade bitcoin, but that price volatility is making things tough for them.

@cryptofelon replies to the broker, stating that while $350k is a bigger offer than the one previously made by this buyer, it is still less than he had anticipated.

Was he able to look past the psyops? Was he able to comprehend the tactics from the other end? And, perhaps most importantly, would he receive the ten bitcoin price?

For a few days, the only response he received was nothing but silence

He hadn’t heard from them in a long time, and he wasn’t going to try again.

But in the end, @cryptofelon’s perseverance and determination paid off, and he received $435,000.

@cryptofelon is, without a doubt, on another level. Those who say it was foolish not to sell for $200k when he acquired it for $16 are fixated on the initial price, which is immaterial.

What counts is what the market would bear, and he was astute enough to ‘compromise’ on Bitcoin at $435k without losing face. He turned down $200k for something that cost him less than $20?

As @thmassacre points out, that’s the stuff legends are made of.

Telegram To Launch a Crypto Exchange